All right, folks, we’re coming up to the launch of Wrath Classic, so this will be an overview of Gems & Enchants for Holy Paladins. 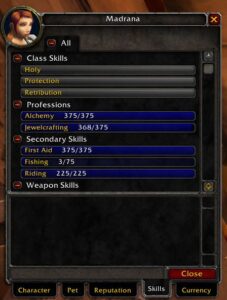 But before we get into it, I did it. I dropped Herbalism and picked up Jewelcrafting and have gotten it to 368, which is close enough to maxed out for me. It’ll be cheaper to get to 375 with Wrath materials, but I’m pretty glad I made the decision to pick up Jewelcrafting. I think it would have super bothered me if I hadn’t. All-told, it wasn’t too bad. The worst part was the mithril. Oh god, the mithril. It was also super expensive at the AH. So I got on Kurn and spent a couple of hours doing laps around The Hinterlands. Yo, that was painful. But it saved me about 300g on the AH. So my total cost was around 800g or so, out of the ~2000g I had. Plus I was able to recoup some costs with leftover mats or things I created.

All right, so gems is probably the best place to start here.

That’s basically the size of it. If you get more intellect, do it. Let’s dive into the details!

Surprisingly, there are a few different meta gems that are interesting.

Insightful Earthsiege Diamond – This is pretty much my top choice of a meta gem throughout Wrath, but in reviewing things, some others look neat, and I’ll get to them. Despite the tooltip, it appears as though this gem restores 600 mana when it procs, which is double the 300 mana it’s thought to give. I’m not sure if they’ve fixed this in Wrath or whatever, but if it does restore 600 mana when it procs, this is great. Bear in mind that this procs on spellcast. Basically any spellcast. Beacon of Light. Sacred Shield. Divine Favor. Divine Illumination. Flash of Light. Holy Light. Etc etc etc. The more you cast, the more mana you get back.

Requires at least 1 Red, 1 Yellow, 1 Blue gem. Now here’s the thing about meta gem requirements like this. This is all three colours. You can use a single prismatic gem to satisfy the requirements of the meta gem. An Enchanted Tear will grant +4 to all stats, for example, which is (and let’s be fair), super underwhelming. But it alone will meet the requirements of the meta gem! This means you do not need a Reckless Monarch Topaz or a Luminous Monarch Topaz (which are orange) to meet a red gem requirement. Nor do you need a Royal Twilight Opal (which is purple) or a Dazzling Forest Emerald (which is green) to meet a blue gem requirement.

Let’s look at an example, using the Gear Planner from Wowhead:

In this gear planner example, I have the Helm of Purified Thoughts, the Titanium Spellshock Necklace and the Ferocious Pauldrons of the Rhino and I have the Insightful Earthsiege Diamond in the helm. Let’s look at the other socket in the helm.

Next, let’s look at the necklace. It’s a red socket with a bonus of 4 intellect. Underwhelming. Putting in a Luminous Monarch Topaz (9 spellpower and 8 intellect) is less intellect than just dropping in a Brilliant Autumn’s Glow. So, 16 int it is and here’s the updated planner.

Finally, let’s look at the shoulders. Yellow socket and the socket bonus is 6 stamina. Also underwhelming. But it’s a yellow socket, so we may as well drop in a Brilliant Autumn’s Glow for the 16 intellect and now we have an extra 6 stamina. Whee.

So here’s the updated planner.

If you hover over the meta gem, you can see we’re missing a red gem. We have not yet activated the meta. If you have no other sockets on your gear, it would be best to put in the Luminous Monarch Topaz into the necklace because it activates your meta. No other reason to do that. But let’s take a look at a more geared person with an updated planner link.

You can see here that there’s not a ton of sockets in this gear. Do we care about +9 stam as a socket bonus on the legs? Nope. Do we care about the +6 spirit on the chest that comes from the socket bonus? Absolutely not. But, if we have to use a Luminous Monarch Topaz anyway, why not take advantage of the socket bonus in the necklace? I get 9 spellpower and 12 int from that gem in that socket, with the bonus. Then, I can add a Brilliant Autumn’s Glow to the Eternal Belt Buckle socket. Doing it this way activates the meta and it gives us the max intellect by getting the socket bonus from the necklace.

So when to use an Enchanted Tear? Well, if you lack sockets, for one. For another, if the bonuses aren’t good enough to put in other gems. The other good thing about the Enchanted Tear is that it will always ensure this meta gem is activated. Always! Swapping gear can mean changing gems and bonuses and sometimes you’ll raid an entire raid week without your meta being activated… So be on top of things for sure and don’t forget to use a prismatic gem if all else fails to activate your meta.

Another meta gem possibility is the Ember Skyflare Diamond, which requires three red gems. You may think this is great, 2% more intellect? AMAZING!!! And you would be kind of wrong. If I had that meta in my gear planner paladin, I’d have less intellect than I have with the Insightful and I’d need to change out some Brilliant Autumn’s Glows for other gems to get the three red gems requirement. So let’s see what that looks like here in another version of the planner.

I’ve changed the meta and the gem in the helm. The gem is now a Royal Twilight Opal because it gets us the 8 intellect from the bonus and it counts as a red gem because it’s purple. I’ve still got a Luminous Monarch Topaz in the necklace. Then, I’ve swapped out the Brilliant Autumn’s Glow in one of the leg sockets with a Luminous Monarch Topaz. This gives me… 9 stam. Why didn’t I go for the socket bonus on the chest, instead? Spirit is useless. Stamina may keep you alive, one day. (I remember being ice blocked on Heroic Sindragosa with like 100 health left. Do not overlook the importance of stamina as a “nice to have” stat.)

Messing with the gems and gaining 2% intellect granted me a net loss of 23 intellect. 2% of like 1000 intellect is 20 intellect. This is not as huge as you think it might be, at least not at this point in the expansion. Let’s say you have roughly 30,000 mana (~1700 intellect), you’re still only getting 34 more intellect with that gem. At 15 mana points per 1 intellect… that’s 510 mana. Not ideal, not when you can get 600 mana back every time the Insightful Earthsiege Diamond procs. So definitely rule out this one.

Relatedly, the Beaming Earthsiege Diamond is also no good. 2% intellect is greater than 2% mana because Divine Intellect, which increases our intellect by up to 10%, is based on intellect and not mana. If given a choice, as a holy paladin, to pick something with intellect or mana, please pick intellect!

Tireless Skyflare Diamond, requires at least 1 Red, 1 Yellow, 1 Blue gem. 25 spellpower and a minor run speed increase? You must think me mad! But no, I’m not. Minor Run Speed Increase is a game-changer in this game. I’ll get into that a little more with enchants later on. Long story short on this one, though, it’s easy to activate (one Enchanted Tear), 25 spellpower ain’t bad, and run speed is godly. This is also likely to be cheaper. So don’t completely rule this one out, just know there are better ways to get run speed and Earthsiege is still better.

Revitalizing Skyflare Diamond, requires at least 2 Red gems. Well, 11 mp5 doesn’t wholly suck, but the Earthsiege is better for mana regen. (The procs mean about 50-75 mp5 depending on how much you cast.) But what about that 3% increased critical healing effect? That means it doesn’t “proc”, it just adds 3% healing to any critical heal. Probably best-used for a disc priest (what with their fancy shields). But what about us paladins? Let’s do some math!

So the difference on FoL is roughly 73, HL is 219 and HS is 99. Note that this is a very small sample size and results may vary, etc, etc. What I’m saying is that 3% additional healing to crits is not presently a lot. Again, this may change later in the expansion, but at the start? Nope. Not this one.

Oh, and if you’re a blacksmith and have extra bracer and glove sockets, MOAR INTELLECT!!! (You also have more flexibility to activate your meta.)

Okay, here’s the gear planner link for the enchants.

Helm: Blissful Mending because 20 crit rating is not quite even 1% crit and 10 mp5 is just more reliable and useful.
Shoulders: Master’s Inscription of the Crag for the same reason as above.
Cloak: Ugh, these are awful choices. If you’re not a tailor or engineer, gotta go with Speed (15 haste)
Chest: Powerful Stats (+10 to all)
Wrist: Exceptional Intellect (+16 int)
Gloves: Exceptional Spellpower (28sp)
Belt: Eternal Belt Buckle
Legs: Sapphire Spellthread (50sp/30 stam) because spirit is useless
Boots: Tuskarr’s Vitality (15 stamina and minor run speed increase) because run speed increase > all other stats. It is SO much easier to dodge the lava wave on Sarth, or do the Heigan dance, or dodge the crash in TOC, or any number of other things. GET RUN SPEED. Engineers have Nitro Boosts, but it’s on a 3m cooldown which may not be enough for some of these scenarios. Personally, I would rather a persistent run speed increase than one on a cooldown.
Rings: If you’re an enchanter, greater spellpower is the way to go. If you’re not an enchanter, you cannot enchant rings.
Weapon: Greater Intellect (30 int)
Shield: Greater Intellect (25 int)

Whew. And that’s it, folks. Next post about holy paladins in Wrath will cover T7 gear that you want.

In the meantime, I wish you a pleasant time in Northrend. See you out there in Howling Fjord or Borean Tundra!